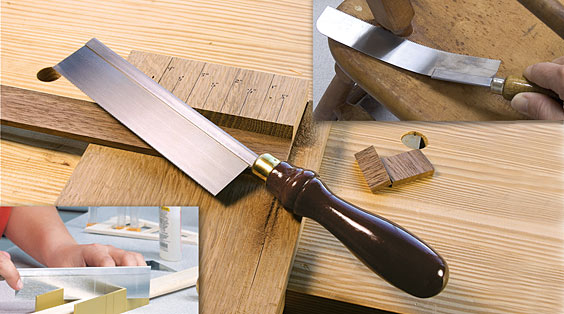 James Brook wrote in the Dec. 2014 issue of Australian Wood Review that the the Zona 35-241 Miter Box and Saw Set is …”very accurate for mitres and splicing.” and stated “Overall, this is faster than setting up a power mitre saw, and much safer.” View or download the the full review.

Anissa Kapsales, Associate Editor of Fine Woodworking Magazine, Winter 2009/10 # 209 Issue wrote, “Dirt-cheap dovetail saw cuts like a champ There are lots of great high-end dovetail saws, both Western style and Japanese, that cost from $40 to well over $100. But I’ve found a cheap saw that cuts dovetails as well as any expensive saw I’ve used. The Zona Universal Fine Kerf Razor Saw (No. 35-500) sells for $6.50. It cuts on the pull stroke, has 32 teeth per inch, and produces a super-thin kerf (0.010 in.)…”

Christopher Schwarz wrote about Zona’s 35-560 & 35-050 Razor Saws in Woodworking Magazine’s June 2007 issue: “They looked like saws for model makers  people who need to cut little balsa parts…But the saws are excellent to have on hand (at this price, why not?) for detail work. Need to cut stringing or inlay banding? These saws will do the job. Trim a dowel. Define the limits of a hinge mortise. Rip or crosscut wedges before driving them into a joint. The surface finish left behind is so clean that it shone like it had been planed. And when used in white oak (a difficult ring-porous wood for fine saws) the saws excelled. They both severed the surface fibers cleanly with no tearing whatsoever. So sometimes you do get more than what you pay for.” In his May 11, 2009 Lost Art Press Blog Mr. Schwartz wrote,
“All I know is that they can take away my Zona Razor Saw from my cold, dead hands. Or they can take it when its kinked  whichever comes first.”